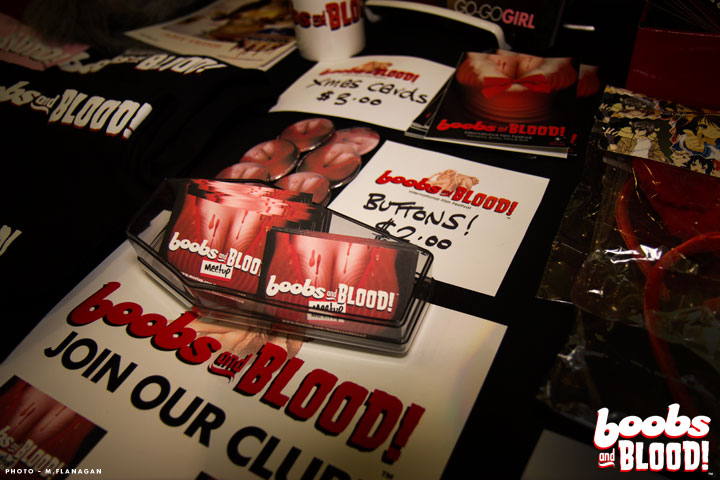 Well what a great SON OF MONSTERPALOOZA weekend it was!  We had such a blast, met new friends, caught up with old ones, gave out lots of freebies and some pure love too (courtesy of our amazingly gorgeous B&B Girls – Dee, Whendy and Amber Jean).  Special “thank you’s” to B&B fans DICK VAN DYKE, CLU GULAGER, THE CHIODO BROS, RON JEREMY, PAT JANKIEWICZ, ROBERT PARIGI, THE LUGOSI FAMILY, JOHNNY LEGEND, BOB BURNS, STEPHEN LACK,  and many, many more.

Only just had time to work my way through the hundreds of photos taken during the SON OF MONSTERPALOOZA weekend, but here are the first of many highlights to come.

Our table was packed with posters, signed stills, buttons, t-shirts books and of course the best and latest DVDs from our great friends PINK EIGA and STAG FILMS. I can’t tell you how many DVDs were sold (seriously, I can’t as I haven’t counted them up yet) but we did great business. We made new PINK EIGA converts – several came back over the SON OF MONSTERPALOOZA weekend to buy more for friends. Others were long time aficionados.

The great thing about SON OF MONSTERPALOOZA is that you really never know who’s going to pop up next. And they’re not always who’d you expect.

With the current festival screening’s of PRESIDENT WOLFMAN (now having won 3 Awards) we were also giving out promotional buttons – helped by the beautiful Dee Tran, another one of the incredibly hard working B&B Girls we had with us at SON OF MONSTERPALOOZA.